Kokoda trail, the 96 Km that has been taken years ago in WWII by the Japanese with the aim to attack Port Moresby as well as by the Australians and Guineans to save the country.

The trek is different from any other I’ve done so far. Not only the history related to it that makes it unique but the feel that the nature that gives it today.
While walking the trail I hear bird of paradise whistle but I feel the fear of war. Mountains turn into enemy and the rain and the mud are their weapons. The tree branches spread out and pop-out off the ground forming a traps to trekkers but at the same time serves as a protection and steps to make the walk easier.

44 hours of walk made me imagine the battle taking by the Australians and the Guineans against the Japanese to protect Papua New Guinea. The trail until today puts whoever walks it under a challenge that is comparable to the war challenge. The trail put the trekkers under the fear of death, in fact some trekkers die walking Kokoda nowadays.
I personally had the thoughts of giving up and abandoning at least couple of times during the 5 days spent in the trail. The pain I felt in my feet which stepped into mud that either covers them entirely leaving them soaking wet or give them a push and slid them down; and boy I can’t tell you how many images I see in those moments: falling of the cliff to where I can’t be found, or stopped by a branch with a broken leg or left unconscious or taking whoever is in front of me and feel the guilt of hurting someone else with me.
The tall rain forest trees, on the other hand, offers protection from the rain in most of the trek and stand as a guide for trekkers to know when will the steep slopes end.

The campgrounds, on the other hand were all placed in beautiful spots, right in the middle of the wildness of the trek. In a flat ground, surrounded by mountains and next to a river that offers peace with the sound of water that breaks the silence and the fear that mountains sends to warn about the walk coming up the next day.

For 5 days, I felt constant battle against nature in the trail with the hope to win and make it to the end.

Spent 7hours in the trek of which 5hours and 42mn walk. Reaching elevation of 1375m walked around 13Km.
The easiest part of the entire trek. The 1st 9Km until Deniki is an easy hike, elevation reaches about 900m, not muddy.
The next 3Km are a bit harder, steepness is about 70 degree but after the end of the trek I think it was only an introduction, in fact now I think that the first day was very very easy.

Spent 9 hours in the trek of which 7hours walking. Reaching an elevation of 1850m, walked around 15Km.
The most interesting day of all. After reaching Isurava battle site, we discovered after about 1h that our portal abandoned us, left without any explanation. Puzzled and shocked on what to do and how are we going to carry our 20Kg backpack of food and cloths, a group of guides were sitting in same site, followed the story, accepted to rescue as long as we can follow their pace and make it to the end by 4 days most. Relieved, we accepted as their offer fit our plan and goal that we set with too much of underestimation of the trek.

The walk was fast paced and firm. The real challenge of the trek started that day. Walking in the rain, crossing rivers, the mountains are getting bigger, steeper and higher.

Spent 9 h and 25mn in the trek of which 8h and 20mn walking. Reaching the highest elevation of the trek 2190m Mt. Bellamy, walked around 26Km.

The challenge of the trek getting harder but we were saved by the heavy rain that started at 4pm and our guides decided to call it a day. But, it wasn’t that great of news as the early stop meant and early start and longer walk the next day.

The longest day of the whole trekking period. The slopes are getting steeper and endless in the ups and in the downs worse as with the rain and the mud built up from the past heavy rain made the walk a torture. In that day I suffered my biggest fall in the hardest mountains of them all “ Maguli Range”. I got a nice colorful souvenir in my leg out of it, it will take quiet a while before the bruise disappears.
When I reached the campground that night I was not even able to think about hunger or thirst, I felt pain all over my body. I collapsed in my sleeping bag crying about how much I miss home and would give anything to get the trekking over.

Spent 9h in the trek of which 8h walking. Walked around 12Km.
The motivation of finishing the trek, having hot shower by the end of the day and sleeping in real bed made me almost run in the up-hills. The excitement of the finish day left a smile in my face even when crossing the 16 rivers and getting the cold water up to my waist sometimes, it even cheered me walking up the last hundred steps that felt like thousands after 7 hours of walk.

But once I was up in Ower’s corner the 96Km hike, the steepness of the mountains, the ugliness of the mud was all forgotten, celebrating the success to make it until the end standing on my two feet. 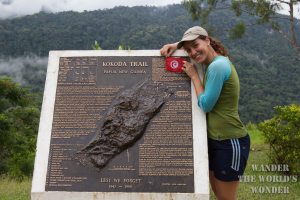 As did the Australian and the Guineans succeeded in stopping the Japanese I succeeded in finishing Kokoda Trek.

Finally made it to the end thanks to my 13 guides 🙂

The guides who rescued me:

There was an error retrieving images from Instagram. An attempt will be remade in a few minutes.